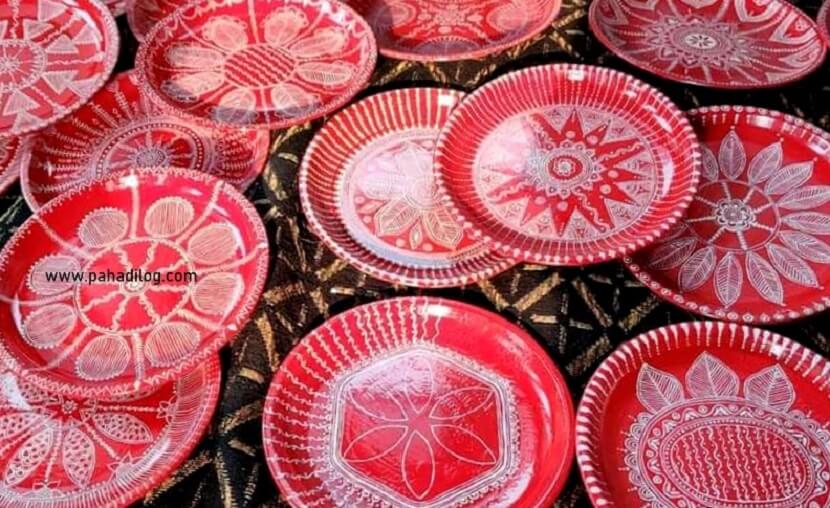 In the mountainous region, various embellishments are made on the Garrick background in such a way that even good painters should be blown away by the equipment on regular occasions. In this style of colour combination, they come in shape drawing which sometimes gives a grand figure by marking only natural colours like ocher and powdered rice solution. Aipan folk Art, of Uttarakhand is famous. The people of Uttarakhand make Aipan folk art mainly in Deepawali festival.

The Aipan art of Kumaon in Uttarakhand also famous in festival season mainly in Deepawali. In this art, the artist made the sun, the moon, the serpent, the conch (शंख). The Bellvarious types of flowers, various vines and other geometric figures are also made. The God symbol used in abundance. Which protected from evil spirits and the sense of public welfare is absorbed in itself. Small folk tales and religious beliefs have been the source of these figures.

Lakshmi’s footsteps made on the occasion of Deepawali are inscribed in the house, courtyard, sill, floor, stairs, gates and rooms. The women lock their fists and go from outside the house to the interior and make Lakshmi’s feet with biswar on the floor. The thumb is made on top of the figure made. The circle is first coloured with red and then Goddess Laxmi thumb made by white colour on it. A round sign is made on the space between the two legs which can also be of floral shape. This sign is a symbol of lotus or wealth in the posture of Lakshmi. There is a practice of making Laxmi’s outpost in the worship room also. At the outpost, Lakshmi, the goddess of wealth and opulence, is built and set with pieces of sugarcane and is decorated with local costumes and decorated with ornaments. For Lakshmi Pujan, Goddess Lakshmi’s thumbs are inscribed on a bronze plate or a paper strap.

While beliefs in the race for modernity are steadily taking root, the paradigm of the nature of the art formulated by women, at least in the mountainous region, has not declined yet. It is another matter that synthetic colours are increasing in place of natural colours. Aipan folk art of Uttarakhnad need to be conserve. As a result, the government should be promoting the folk art of Uttarakhand through various programs.