Story of Max and Ghost – The Himalayan Husky 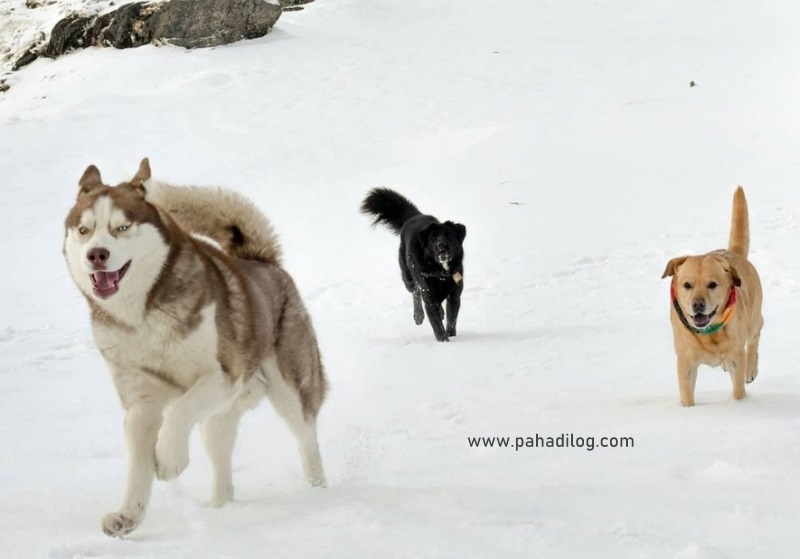 The two dogs Max and Ghost, are among the most famous dogs on YouTube. They live in Pithoragarh, which is a small town located in the western Himalayas. Max is a Labrador, whereas Ghost is a Siberian husky. They have been together since they were puppies, and now after six years, they are travelling and discovering the hidden beauty of the Himalayas. All of this has been possible with the help of the person who gave them the love they deserved, the person who considers them as his children and treats them the same way a father does with his child. Divy Khatri is the man who, along with his two dogs, has inspired hundreds of adventurers by his YouTube videos.

The Siberian husky out there named Ghost is one of the most beautiful organisms on the earth. Divy Khatri’s Ghost is a bicoloured Siberian husky, and he has been there with him since he was very small. The fact that it is very hard to maintain a Husky and it survives in mountain only. Siberian husky is very sensitive to temperature and environmental conditions. Divy Khatri owns a channel named The Himalayan husky in which he posts and shares about all his trips and his life with these two adorable dogs.

Now the first dog that Divy Khatri met was his Labrador which he named Max. Labradors are one of the cutest and loving dogs and in India, they seem to be one of the favourite choices among dogs. Max was special to him as he met Max during hard times and got attached to the sweet little thing. You can see in his videos how he and his boys spent the most time of their day playing with Max. In short, Max brought them back to a happy life.

So, if you have a dream of having one of these beautiful dogs in India, sorry to inform you but crush your desire and forget about such an idea, the Siberian husky cannot survive in India. It is next to impossible for a husky to survive in the climate of India. The husky is a native dog of Siberia where the temperature falls more than -50 degrees Celsius and so survives in mountain only.

For tackling such cold conditions, the body of a husky is adapted to trap heat. They have 2-3 layers of fur, which acts as insulation for their body. Not only their body but even their paws have thick soles to prevent their contact with ice in Siberia. Now, if such a dog is brought into the Indian conditions where the average temperature is 25-30 degrees Celsius,  just imagine how hard it will be for the husky to cope with the conditions.

I know these dogs are one of the most beautiful things on the earth and how can one not fall in love with those beautiful blue eyes. There are a lot of illegal traders who trade husky dogs in India, but it’s very unfair if you just for your own sake put the life of an animal who can’t even speak for himself in danger.

Keeping a Siberian husky in India is like if someone made you wear five sweaters and forced to sit in front of a fire on a hot sunny day. The only way you can have these dogs is the way Divy Khatri did; you can keep it and live in the Himalayas as husky survive in mountains only. If you don’t have such an option and still are keeping a husky in such conditions, you are killing him.

The page, as I told you earlier, is all about these two dogs living in the mountains and exploring the Himalayas. Max and Ghost have been to, too many mysterious and adventurous places and have shown the beauty of the Himalayas to the people of the world through their videos.

The story behind Divy Khatri meeting these dogs

Not only are these dogs amazing but also the story of their lives and the journey they made, which led to Himalayan husky is terrific. Divy Khatri himself came out with the story behind the Himalayan Husky. He considers his meeting with Max a matter of luck and destiny. Max was the first among them to meet Divy Khatri. Divy Khatri was going through hard times in his life and was mentally unfit due to the loss of his grandmother during those times and it was Max who helped him out.

His life was all around that of Max. The dog was underweight when Khatri found him, and the vets claimed he wouldn’t survive, but the brave dog did and proved them wrong. Soon due to work Khatri moved Max to Pithoragarh but realized Max felt alone while he wasn’t there. Also, the other dogs mistreated and harmed Max, and he wasn’t able to protect himself.

So the search began to find Max, a brother. Khatri claimed he was looking for a German shepherd, but when destiny plays, you don’t have things under control, and so came the Siberian husky, Ghost. Ghost was very notorious as a puppy but always protective for Max. Max treated him like his big brother, and soon they became best buddies, which led to the formation of The Himalayan Husky.